The pomegranate isn't the easiest fruit to eat and that’s probably why it has often been overlooked, in fact, people tend to ignore it simply because it seems too much trouble to get at the nutrition inside, but recent research into its health giving properties has now put it firmly in the 'superfood' bracket, thereby encouraging people to rethink their attitude to this humble but versatile fruit. However, its superfood status isn't new, the pomegranate has been regarded as a superfood by our ancestors for centuries, and it’s one of the oldest known fruits.

Originally a native of Persia, it's found in writings and artifacts of many cultures and religions, it has been eaten and used for medicinal purposes, especially in the Middle and Far East regions for over a thousand years, and some cultures saw it as a fruit of hope and abundance. The Latin word for Pomegranate is 'seeded apple’ and there are some who believe it was the pomegranate that grew in the Garden of Eden and not the apple.

What is a Pomegranate?

The pomegranate (punica granatum) is a ruby red fruit with a tough shiny outer layer. For those who have never eaten a pomegranate, if you cut it in half, you'll find it filled with fiber rich crunchy seeds encased in a ruby colored 'jewel like' sacs of juicy flesh. These are called 'arils' (around 600 of them in an average pomegranate), they are separated by thin, bitter white membranes and they are nutrient dense and antioxidant rich, as well as being packed full of phytochemical compounds and high levels of flavonoids and polyphenols. The ‘arils’ (flesh and seed) are the parts you eat, though some people tend to chew the flesh off then spit out the seed.

Pomegranates are now grown mainly in America, Spain, the Middle East and India. Sometimes referred to as the Chinese apple or 'jewel of the winter', it is regarded as one of the world’s most popular fruits, yet it's often overshadowed by more common fruits such as apples and oranges purely because of the 'time consuming' preparation. Having said that, once you have mastered the art of how to prepare and eat a pomegranate, it can add valuable nutrition and antioxidants to your diet.

Pomegranates Are an Antioxidant-Rich Superfood

The main source of the pomegranates benefits comes from its antioxidant content. A recent study, proved that it contained every type of antioxidant, in particular, punicalagins and punicalins, which account for around half of its antioxidant ability, it also provides about 40% of the daily requirement of vitamin C.

Many studies show that the pomegranate is one of the most powerful, nutrient dense foods for overall good health, these clinical findings clearly show a correlation between pomegranate compounds and their positive effect on both animal and human cardiovascular and skeletal health.

How to Eat a Pomegranate?

It may seem like a lot of hard work to extract and eat the seeds of a pomegranate, but getting to those seeds will be well worth it in the end. If you want to save the seeds to eat later, they can be stored in the fridge in a perforated bag for a couple of weeks, or stored in the freezer for all year round health benefits. There are a few ways to de-seed and eat a pomegranate and if it still seems too fiddly to bother with, then it's quite simple to turn it into a delicious, healthy juice.

It's easy to remove the edible arils from the pomegranate once you know how to do it. The simplest way is to first roll the fruit to loosen the seeds, then score around the middle and tear open the two halves, hold each half over a bowl, seeds facing down into the bowl and tap the skin with a wooden spoon, squeezing a little to release the seeds.

You can also score the pomegranate from top to bottom to quarter it, then submerge in a bowl of water and pull apart the quarters, releasing the seeds with your hands. The pith will float and the seeds will sink, discard the pith, drain the seeds and pat dry.

Cutting the pomegranate in half and picking the individual arils out with a pin or toothpick, is an option if you have time to sit and eat them one by one. It’s not however, an option everyone would choose, as the mere thought of sitting with half a pomegranate and pricking out the seeds, makes it seem too ‘fiddly’ and not worth the effort, but stick with it, the juice from the flesh and the fiber from the seed, will definitely enhance your diet, do remember though that he skin and the pith should not be eaten.

How to Enjoy Pomegranate Seeds 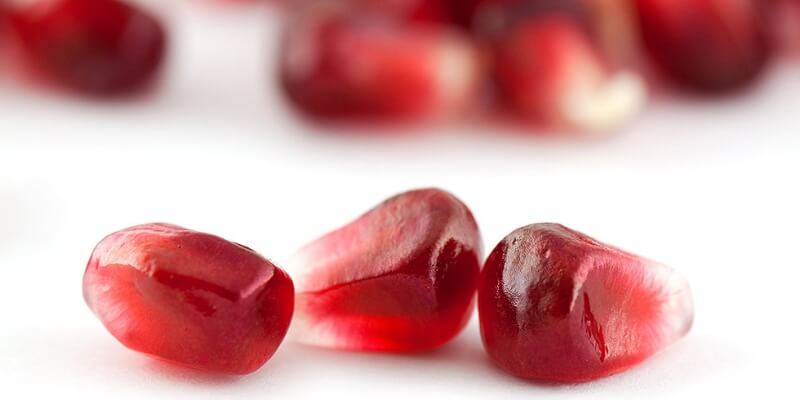 The Processor and Blender

De-seed the pomegranate and place the drained seeds in the food processor or even your blender for smoothies and process until combined into a pulp. Empty the pulp into a sieve set over a bowl and using the back of a spoon, press the pulp to release the juice. If you require a clearer juice then line the sieve with a double layer of cheesecloth.

If you have a juicer, the juice will be separated from the pulp and ready to drink. You can then use the pulp if you wish, for use in other recipes.

There are some machines on the market now that can combine the juice and arils to make a super-rich smoothie in seconds, with no waste and no mess, a good alternative for those who don't have much time, or who want the whole experience. Once juiced, taste for preference, pomegranate juice shouldn't need any sweeteners if they are ripe, but if you have a sweet tooth, then add strawberries or other naturally sweet fruit.

Eating Pomegranates or drinking its juice, has been shown to cleanse the circulatory system and help to unclog arteries, making it a good anti-coagulant. A glass of pomegranate juice has more antioxidants than red wine, green tea, blueberries, and cranberries. The wonderful flavor and health benefits of the pomegranate make juicing well worth the effort.

So what role do pomegranates play in benefiting our health? Well for a start, they have high levels of antioxidants like hydrolysable tannins or polyphenols, which help to reduce the effects of free radicals on the body and also help to remove them. The juice of the pomegranate acts as a blood thinner and can help to remove plaque from the arteries, which will minimize the risk of atherosclerosis. It can also help to increase HDL cholesterol and lower LDL cholesterol which will reduce the risk of cardiovascular problems.

The numerous health benefits of the pomegranate continue with its anti-inflammatory properties, due to the high amount of vitamin C it contains, helping to manage coughs colds, sore throats and asthma. The pomegranate also contains a high amount of iron, which raises the hemoglobin levels in the blood, making it a good choice of fruit for those with anemia. The enzyme inhibitors in pomegranate juice can improve bone quality, it can also control cartilage degeneration and help to prevent cartilage damage, which leads to osteoarthritis.

Good news for those who want to maintain a healthy weight, pomegranates only have 130-150 calories, with around 105 of those calories being derived from the seeds. If you love eating pomegranates and want to incorporate them into your diet, then it's good to know that their natural properties can also provide additional energy while also cleansing the body. Making it an ideal food to eat on a weight loss program.

Studies show that the antioxidants in pomegranates can have a positive effect on Prostate Cancer. They have been found to reduce prostate specific antigen in clinical trials on men who regularly consumed pomegranate juice. The juice was found to inhibit the growth of the cancer cell and lower its risk of metastasizing, the high phytochemicals in the juice seem to have a distinct effect on delaying and stabilizing the growth of PSA in men. Research is still ongoing to see if pomegranates can be used to treat those men who already have localized prostate cancer.

As well as protecting women from breast cancer, pomegranates are also an aid in Pregnancy. Pomegranate juice is high in all the essential vitamins and minerals needed during pregnancy, packed full of niacin, folic acid, potassium calcium, iron, vitamin C and fiber, they help to maintain the health of the pregnant women and encourage cell growth. Drinking pomegranate juice during pregnancy reduces cramps and sleep problems, it has also been found to increase the blood flow to the baby while in the womb, which helps to reduce the risk of brain damage.

Thanks to new research, the pomegranate is re-emerging as one of the top superfoods of the 21st century. In a study in 2008, the potency of its juice was found to be at least 20 % greater compared to 10 other polyphenol rich juices, beating acacia juice and blueberry juice.

Known for centuries to be a health giving and medicinal fruit, we are now beginning to understand what our ancestors already knew, that the pomegranate really is ‘the jewel of the winter'.

Not only is the pomegranate a health giving super fruit, but it also has the extra bonus of being able to protect the dermis and epidermis by helping with skin cell regeneration, it aids in the repair of skin tissue and encourages circulation to skin that is healing. The oil of the pomegranate contains the antioxidant 'ellagic acid' which can inhibit skin tumors and protect the skin from cancer. The juice and flesh of the pomegranate contains compounds that help to protect against free radical damage caused by sun damage.

Pomegranates can help in the prevention of wrinkles, fine lines, age spots and hyper pigmentations, which are all mainly caused by sun damage. They can also help to soften skin and produce additional collagen and elastin, which is what makes the skin look smoother and more youthful. If you have oily or combination skin that is prone to acne, pomegranate will help to sooth the outbreaks and help to minimize the scarring and burning that can occur. It can provide additional moisture to dry skin which is why it's often added to dry skin products.

All of this makes the pomegranate an ideal choice of fruit for internal health as well as helping to keep you looking youthful and glowing on the outside.